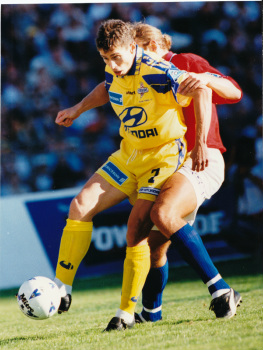 NSL Grand Final, Brisbane Strikers v Sydney United, 1997
Kid stuff
I was born in Darwin in September 1964 and moved to Papua New Guinea when I was 2.

When I was 10, I moved to Cairns and attended St Augustine's College for whom I played football (or soccer as it was known then), as well as Stratford United and Edge Hill United.

My first semi-pro game
At 16, one of my school teachers suggested I try out for Mareeba United which was then in the Queensland State League and I played four games with them towards the end of the season. It was the first time I was paid for playing football and was so thrilled with the pay packet that I bought a rug for my bedroom with the money!

Australian Institute of Sport
Quite by chance, towards the end of that year (1981), I was spotted by the Head Coach at the AIS, Jimmy Shoulder, as one of the 'demonstrators' at a coaches coaching program and I was offered a scholarship to the AIS in Canberra in only the second year of the football program. It was a huge move for me, and one of my mates from Cairns, Ray Junna.

As well as Ray, I met some lifelong friends at the AIS: Ron Smith, who was then assistant coach at the AIS; Rod Brown, Jean Paul de Marigny and Tony Franken.

National Soccer League
I was asked to join the Canberra Arrows in the national soccer league (NSL) in my second year at the AIS (1983), while still at the AIS, and I had good two years there with players such as George Christopolous, Terry Byrne and the great Atti Abonyi, one of the 1974 Socceroos.

In 1985, I moved to Sydney City - which was the team of the NSL - and linked up with John Kosmina, Alex Robertson, Steve 'Rocky' O'Connor, Gerry Gomez and one of my mentors, coach Eddie Thomson. Sydney City was withdrawn from the NSL competition one game into the 1987 season without notice by owner, Frank Lowy. I was able to manage a transfer to Marconi where my team mates included Steve Calderan, Bob Caitlin, Tony Henderson, Ian Gray, David Lowe and others.

Overseas Career
In 1988, the Bicentennial Gold Cup, the Seoul Olympic Games and an overseas career beckoned.

After completing my national team commitments at the Olympic Games, I transferred to Club Brugge in Belgium from 1988-89 for three seasons. I really enjoyed my time at Club Brugge and Julie (who I married in 1991) and
I really loved living there. The club won the championship in 1990-91, the Belgian Cup in 1990-91 and the Belgian Super Cup in 1990 and 1991 - which always helps!

From there, I moved to Bari in Italy's Serie A on a record transfer fee for an Australian player of $3 million in 1991-92 - and the first Aussie to play in the Serie A. However, my time there was shortlived: soon after I arrived, there was a change of coach and I spent the remainder of the season cooling my heels in Bari with a brief loan period to Notts County in England.

After the nightmare year of 1991-92, I moved to Ligue 1 in France and had two enjoyable seasons in Strasbourg followed by one season with Lille. Our son, Jordan, was born in Belgium in 1992.

Back to the NSL
I was in Australia for a Socceroos match and decided it was time to come home after seven years overseas. I was sharing a room with 'Arnie' (Graham Arnold) at the time. He thought I was pretty crazy as there was more money to be earned in Europe and I was still near the top of my game. But I also knew it was what I wanted.

I signed with the Brisbane Strikers - then a fairly new and struggling team in the NSL, and I thought I could do more to help them than some of the other teams who were interested in me.

It was a wonderful return home to Queensland. Our daughter, Tyler, was born in 1995. We also made the semi-finals in the first season; I was made player-coach in the second season and we won the NSL Grand Final in May 1997 in what was truly an history-making day for the sport in Australia. We attracted a record and capacity crowd of 40,446 to Suncorp Stadium (capacity was then 40,000; increased to 55,000 today). The next season we didn't do so well: my old mate and fellow striker, Rod Brown, and I were on our last legs and three other older team mates (Alan Hunter, Danny Wright and Gary Phillips) retired after the success of the previous season. We finished the season in 9th position.

The following season I returned to Club Marconi in Sydney as coach for 1988-89 where we made the finals.

The book on my playing career (written by Bonita Mersiades), entitled My World is Round, was published in September 1998.

Playing for Australia
As a player, I represented Australia on 89 occasions, including the World Youth Cup in Mexico in 1983; the 1986, 1990 and 1994 World Cup campaigns; and the 1988 Seoul Olympics.  I first played for the Socceroos as a 19-year-old in 1984. I retired from international competition in 1993 but my official farewell match was against Ghana in 1995.

Coaching
In August 1999, I was appointed coach of the Australian national team, the 'Socceroos' at a time when there was hardly any money in the game. During this time, I took the team through the 2002 World Cup campaign, the 2000 Oceania Nations Cup, the 2001 and 2005 Confederations Cup and the 2004 Athens Olympics. Our most famous victories in this period were against Brazil and France, and being placed 3rd in the 2001 Confederations Cup, and against England in a Friendly. I was replaced as national coach in June 2005 by Guus Hiddink.

In November 2006, I was appointed coach of Brisbane Roar in the A-League until October 2009. In 2011, I was appointed national coach of PNG - back to where I played my first game as a 7 year old - on a part time basis, and in 2012 I was appointed as Technical Advisor and Coach Mentor by the Oceania Football Confederation to set up coaching and development programs in PNG. A few weeks after taking up the latter role, I was appointed coach of Sydney FC strictly for the remainder of the 2012-13 season and stayed there until the end of the following season. I returned to work within the Oceania Football Confederation as a technical advisor to the Fiji FA to set-up a coach education structure, and as coach of the U-20 team at the U-20 World Cup in 2015 and the Olympic team for Rio 2016.

Honoured
After my family, it has been an enormous privilege to play for Australia, to coach Australia, PNG and Fiji and to have a career in football.

I am honoured to have been awarded an OAM for services to football as a player and coach in 2000, made a Life Member of Professional Footballers' Australia (PFA) in 2008 and to receive the Alex Tobin Medal from the PFA in 2012.

At home
When I'm not playing, coaching or watching football, I enjoy playing golf or watching movies. I follow the Queensland Reds in rugby; the Maroons and North Queensland Cowboys in rugby league; Brisbane Lions in the AFL; and Manchester United and AC Milan - although I also have a soft spot for Bologna as it is the home of my father.
UA-32414598-1